About B & B Pools and Spas 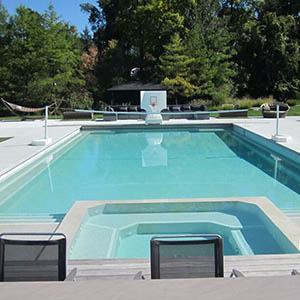 B&B Pool Service & Supply Co. was founded in 1963. The name originated from founder Edward Bianco and his principal non-stock-holding partner, Larry Brady, hence Bianco & Brady (B&B). In 1976, Bianco wanted to pursue other interests and sold the business to John Juntunen. Less than a year later, Tim Sedmak joined John as his business partner and they have been building the business ever since.

John Juntunen graduated from Eastern Michigan University in 1970 with a bachelor’s in chemistry. With his chemistry background, John went to work for the Steelcrete Company in Novi, which was the leading swimming pool equipment and chemical distributor in Southeast Michigan. After a few years John was recruited by the Haviland Chemical Company in Grand Rapids where he was the leading salesman for its Consumer Products Division, which specifically targeted the commercial and residential swimming pool chemical market.

Tim Sedmak also graduated in 1970 with a B.A. from the University of Michigan. Tim’s swimming pool career began in early 1972 with Town & Country Pools in Ypsilanti, where he was vice president and part owner. Tim was responsible for all aspects of running a small business, including hiring employees, making payroll, purchasing, accounting, hands-on field experience and customer service. Town & Country Pools specialized in commercial service and bulk sodium hypochlorite supply, but also expanded into residential construction.

Dane Frederiksen's career began in 1996 with Paddock Pools of Eastern Michigan, where he entered the pool industry as a plumbing laborer. Dane quickly moved up in the organization with his love of building pools. Before leaving Paddock Pools Dane was a Foreman on projects of all sizes ranging from custom backyard pools to water parks. Dane ultimately accepted a position with B & B pools in 2007, where he started building one of the company’s largest projects to date. Once the project was completed John and Tim offered him a position in the office performing general sales. Dane was moved up to Sales Manager where he had the pleasure of working directly with Tim for 7 years. In 2014 John and Tim offered Dane the opportunity to purchase B & B Pools.